Places to visit in Kasaragod 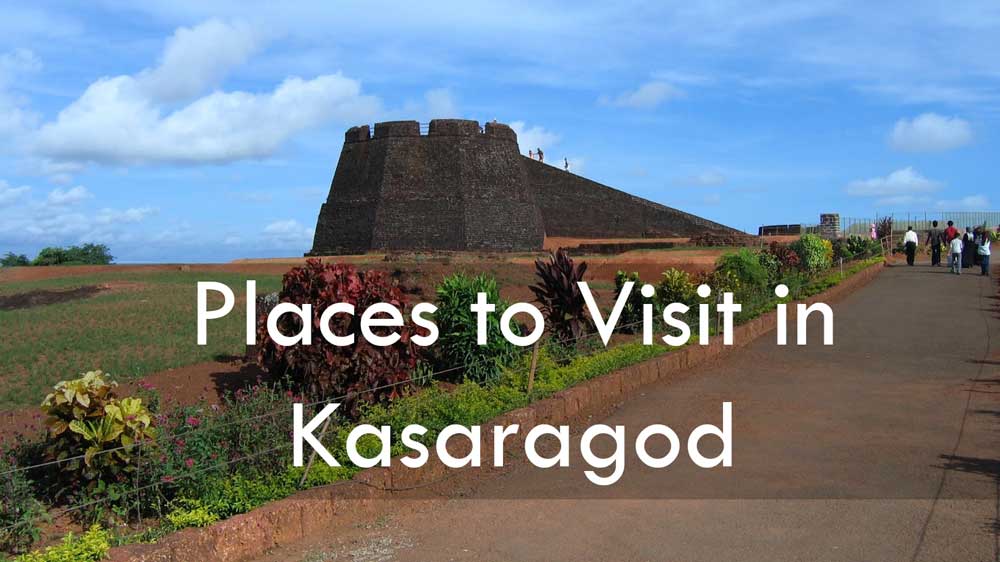 Kasaragod- The land of gods!

Situated at the northernmost tip of Kerala, Kasaragod is known world wide for its coir and hand-loom industries. It is a land of abundant natural beauty and cultural and historical significance. The 12 rivers scattered across its terrain adds to its enchanting beauty.

The derivation of the name Kasaragod, has two theories associated with it. One is that it is derived from two Sanskrit words “Kaasara” meaning lake or pond and “kroda” meaning where a treasure is kept. The other theory is that it got its name due to the abundance of Kaasaraka/Kaasakra (Strychnos nus vomica) trees.

The district is walled all along its eastern border by the western ghats and by the Lakshadweep sea along its western borders.

Kasaragod has a long history dating from prehistoric times. Arabs visited this land between the 9th and 14th centuries as it was then an important trading centre.

Kasaragod has seen many rulers along it history. The Kolathiri Raja and Ikkeri kayaks has ruled Kasaragod. Tippu Sultan conquered the district and later surrendered it to the British Government in 1792. After the independence Kasaragod belonged to Karnataka state. It became part of Kerala in 1956 and a separate district in 1984.

Kasaragod has a strong foot hold in the cultural landscape of Kerala. It is famous for the art forms of Yaksha Gaana, Bombeyatto and Theyyam. Poorakkali, Kolkali, Oppana etc add colour to the lives of this land. Reasons to visit Kasaragod do not end there. The golden sandy beaches, forts which stand as tall testaments to the historical and archaeological significance of the land, mesmerising hills and rivers and the warm and embracing people make this district a must stop destination for tourist.

Situated 16 km south of the Kasaragod town, is the towering Bekal Fort dating back to the glories of 17th century Kerala. The giant keyhole shaped fort that changed hands over many dynasty of Indian rulers, finally ended up in the hands of British empire about two centuries ago. It went through many transitions along the journey, as K.P. Padmanabha Menon writes in his book on Kerala History.

The present day Bekal fort originally built by the rulers of the ancient Kadampa dynasty is believed to be the residence allotted to the Vadakkelamkur, the third son of Kolathiri or Chirakkal Rajas until Shivappa Nayaka of Bednoor invaded the region in 1650. It was Hyder Ali, the Mysore ruler who then captured the stronghold on Bekal.

During Tipu Sultan’s great military expedition to capture Malabar, Bekal Fort served as his important military station for his army. It was at the fourth Anglo-Indian war that Tipu was defeated by East India Company and fort became the headquarters of the newly organised Bekal Taluk of South Canara District in Bombay presidency.

Bekal Taluk was later renamed as Kasaragod Taluk. Slowly the political and economic magnitude of Bekal and its port declined considerably. With the state reorganization in 1956 Kasaragod became part of Kerala.

What makes the Bekal fort special is it is the largest and best preserved fort in the whole of Kerala, bordered by a splendid beach. Once equipped with Giant canons, the fort was strategically planned for security and defence.

An important feature of this fort is the water-tank with its flight of steps. The fort has a tunnel opening towards the south and a magazine for keeping ammunition with broad steps leading to the Observation Tower, from where one has can have a great view of towns in the vicinity like Kanhangad, Pallikkara, Bekal, Kottikkulam, and Uduma.

The nearest railway station is Kasaragod, on the Kozhikode-Mangalore-Mumbai route, about 16 km away and the nearest airport is Mangalore, about 50 km from Kasaragod town.

Other important forts in Kasaragod are:

Madhur Temple or Madhur Madanantheswara Siddhi Vinayaka Temple located 8kms away from Kasaragod town is the most famous Ganapathi temple amongst the six temples of ancient tulu nadu.

Though the preceding deity is Siva the temple is famous for lord Ganapati who is also worshipped here.

Set against the enchanting landscape of Madhuvahini river, the temple architecture has influences of both hindu and Jain architectural styles which in itself is a peculiar combination. Thus it attracts not only devotees but also architectural students and enthusiasts. The temple was built by the Mypadi- rulers of Kumbala in the 10th century and later renovated to its present form in the 15th century.

The Oval shape structure with a three tiered dome, with the upper two stories completed with copper plate roofing is one of its kind. The hand carved wooden pillars and beams stand as proof to the craftsmen ship of a bygone era. The ceiling of the namaskara mandapam of Madhur temple is decorated with beautiful figures of puranic heroes in wood carvings depicting various episodes of Ramayana.

Tippu Sultan, when he attacked Kumbala borders decided to demolish the temple, but later changed his mind. He left only with a cut he made with his sword which can still be seen here.

It is situated at a distance of 8kms from Kasaragod Railway station and 16 kms from Mangalore Airport.

Other important temples in Kasaragod are:

Situated about 750 meters above sea level, Ranipuram is a trekkers paradise. Within close proximity to bhagamandala forests, this region is blessed with abundant natural beauty. Its varied vegetation includes evergreen shola woods, monsoon forests and grasslands all of which add to the charm of the place.

Ranipuram is often compared to Ooty due to its scenic beauty. It was earlier known as Madathumala, whose extensive forests merged into those of Karnataka. This offbeat place tucked away from the concrete jungles is a much loved destination for trekking enthusiasts.

Exploring these hills on foot surrounded by the calm of the nature is not just a serene experience for tourists but much enjoyed by nature photographers as well. The two and a half kilometre trek up the summit promises you not only a breath taking view but also an adventure one can never forget. Jeep and bus services are available from Panathady and Kanhangad in kasaragod town to Ranipuram.

It is situated at a distance of 45kms from Kanhangad railway station and 125kms from Mangalore International Airport.

Situated about 30 kms from Bekal, Valiyapramba in Kasaragod district is slowly finding its way into the tourist maps of Kerala. It is the northern part of Kavvayi backwaters. It is the third largest backwaters in Kerala .

The unspoilt beauty of these backwaters are enough to capture the attention of any nature lover. Fed by four rivers and dotted with numerous islands valiyaparamba backwaters exude a rustic charm. Handloom, agriculture, fishing and coir industries of Valiyaparamba have only added to its appeal.

Traditional kettuvallam (houseboat) cruises in these backwaters experiencing the panoramic view of the coconut groves and its many islands is one to remember. The island is also known for its coconut husking and mussel cultivation.

Nearest railway station from Valiyaparamba is Cheruvathur, located just 5 km away. Nearest Airports are located at a distance of 100 km and 150 km- Mangalore and Karipur international airports respectively.

Ananthapura lake temple is a 9th century hindu temple situated at Ananthapur village of Kasaragod district at a distance of 6 kms from Kumbala. The sanctum sanctorum of the temple is built within a lake spread over 2 acres and is assessable only by a bridge.

History of the temple has many stories and myths associated with it, but with little proof. It is believed that Divakara Muni Vilwamangalam, the great Tulu Brahmin sage performed apoojas and did penance here. Lord Narayana (vishnu) who assumed the form of an orphan boy was taken under his wings by the sage. Later when scolded for his juvenile pranks the boy disappeared. Vilwamangalam realising that the boy was lord Narayana himselfset out in search of him ans finally got darshana from Lord Vishnu.

The temple’s myths include the story of Babia,the crocodile, who is cconsidered the guardian of the temple.

Babia is frequently sighted in the lake and feeds on offerings made by the devotees. It is claimed that this crocodile is vegetarian and do not harm any human beings or fish in the lake.

Around the 2-acre lake within which the present temple is situated, there are ruins of the temple complex from 9th century. The temple is open to all regardless of caste and creed.

Another feature is that the idols of the sanctum sanctorum were not made of metal or stone, but with a rare combination of medicinal substances called the “Kadu Sarkara yogam”. It was replaced by panchaloha idols in 1972.

The nearest railway station is the Kasaragod station,12kms away and the nearest airport is Mangalore Airport, 60kms away.

Situated about 6kms from Bekal Fort, kappil Beach is a relatively unexplored and secluded beach. This calm and relaxing beach – backwater destination is ideal for a picnic with family or friends. The golden sands and the mesmerising Arabian sea and thick groves of casuarinas trees, is enough to transport one to another world of serenity.

If you like a little adventure, then make sure you take a boat ride here at the beach. Many small and medium sized ferry boats take people out in to the sea for a ride. This shaky ride is not for the faint hearted but definitely worth every penny.

One can find food stalls and small shops all along the beach and can indulge in some snacks and savouries as well as shop at decent rates.

The Kodi cliff nearby is gradually becoming a popular trekking point. The breath-taking view of the Arabian sea from the cliff top is a sweet reward for the climb.

Kappil beach is located 14 kms away from Kasaragod railway station and 50kms from Mangalore airport.

Other important beaches in Kasaragod are:

Situated at Thalangara in Kasaragod, Malik Deenar Mosque is one of the most attractive and best preserved mosques in Kerala.  This ancient and historic mosque is believed to have been built by Malik Ibn Deenar, a follower of prophet Muhammed.

Malik ibn Deenar is famous for bringing Islam to Kerala. In   624 AD, Malik Ibn Deenar and 12 of his trade associates landed in Kerala. Their mission was not just trade but to propagate Islam in other parts of the world. The delegation consisted of Sharaf Ibn Malik, his brother Malik Ibn Deenar and his nephew Malik Ibn Habeeb Ibn Malik.

They attracted the attention of then ruler Cheraman Perumal. Fascinated by this new religion, Perumal embraced Islam. The mosque was built in 624 AD  and later reconstructed in 1809 AD with local support and help.

Malik Deenar Uroos, commemoration of the arrival of Malik Ibn Deenar in Kerala is celebrated here every year.

The mosque is situated a kilometre away from Kasaragod railway station and about 64kms from Mangalore airport.

Other important mosque in Kasaragod: